Do you need a Prenuptial Agreement? 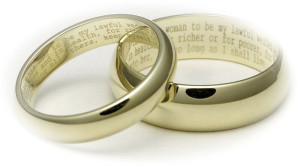 It is often said that “marriage changes things”. This is especially true in a legal sense. There are certain legal rights and obligations that are automatically created the moment two people say “I do”. These rights and obligations operate during the marriage but they are particularly important in the event the marriage is terminated, either by divorce or by the death of one spouse. The rights and obligations are set out in the laws created by your state legislature. Those laws are interpreted and enforced by the state courts. It is a “government plan” for your marriage. The “government plan” for marriage is not necessarily what you want or need. It can be unfair, unreasonable, and unjust. Many times, it is inappropriate to your situation. In the event of a divorce, it can create result in incredible expense.
If you wish, you can change or even do away with many parts of the “government plan”. You and your future spouse can create your own plan that is suited to your unique situation. You can do so with the advice and counsel of professionals who are trained to assist you in considering relevant issues and to offer you workable options. And by doing this you can save you (or your children) many thousands of dollars.

Premarital Agreements (aka Antenuptial Agreements or Prenuptial Agreements) are contracts between two people who are planning to marry. The contract sets out the legal rights and obligations that each will have after the marriage. Tennessee, as well as most other states, recognize and enforce these contracts if they are properly written, reviewed, and signed by the parties.

Many couples marry without even discussing, much less agreeing upon, who will be expected to do what during the marriage; how debts will be paid, what contributions each will be expected to make (financially or otherwise). There are several other issues that are important, yet often ignored by couples who plan to marry. Younger couples who have never been married tend to have fewer assets that they will want to protect in the event the marriage ends in divorce. Older couples, especially couples who have been married before, often have separate assets which they wish to protect. They also have more definite ideas about what they expect from their partners. Discussing the terms of a Premarital Agreement can be an excellent exercise for any couple. It forces them to experience the reality of dealing with sensitive and potentially uncomfortable questions, and it allows them to do so while they are happy with one another.

There is a “government plan” which will dictate what your rights and obligations are in the event of a divorce. Such a plan will define what property, if any, belongs to the individual and what property is “marital property”. Marital property is subject to be divided between the two of you. The fact that the property is held in only your name may make no difference in whether it will be considered “marital property”. In a divorce, property held in one person’s name is often deemed to be “marital property”, and can be divided between the divorcing couple by the court. Assets of a family business may be divided by the court between two divorcing parties, which can have a devastating effect on the value of the business and the ability of one or both divorcing people to continue to earn a living in the future. Division of property, alimony, attorney fees and court costs are all issues that are controlled by your state legislature and the courts in the absence of a Premarital Agreement.

Consider the following example: Sally is a widow. She has three children of her former marriage. Upon her husband’s death, she was left with a successful and growing family business, a house with $300,000 equity, her deceased husband’s $300,000 retirement account, and cash in the bank. Harry has a good job making lots of money, but has recently lost all of his savings in a prolonged and bitter divorce. He has a house with $10,000 in equity. He has no children. Harry and Sally meet, fall in love and decide to marry. Neither considers the possible advantages of a Premarital Agreement. Neither party has a Will.

After their marriage, they sell their respective houses and use the money to purchase a new house for $310,000. The home is put in both names. They consolidate their bank accounts. Each is named the beneficiary of the other’s retirement account. Harry adds Sally and her kids to his employer-provided health insurance plan. Things don’t work out between Harry and Sally. Harry loses his job, and is not immediately successful in finding a new one. Sally considers a divorce and goes to visit a family law attorney. He advises her that under Tennessee law, she could lose one-half of all the property that has been put in their joint names regardless of the fact that substantially all of it was hers prior to the marriage. Sally also learns that she may have to pay Harry temporary alimony prior to the divorce (since he has no current income), and she may also have to pay alimony after the divorce to support him until he can get a new job. Finally, Harry may be entitled to some portion of the value of the family business Sally had from her first marriage since it has increased in value during her marriage to Harry. The longer they stay married, the greater is Sally’s risk of being ordered to pay alimony, and the greater the chances that Harry will get a share of the property that Sally bought into the marriage. Can Sally afford to divorce Harry? Can she afford not to? Will there be enough left for her and her children to survive? Can a judge be trusted to “just do the right thing”? Most of her problems could have been avoided if Sally had talked to her lawyer when she decided to get married. A Premarital Agreement could have protected Sally’s assets for her and her children.

Divorce is not the only bad situation that can be made less harmful by a good Premarital Agreement. Death eventually comes to us all. If you die while you are married, your widow(er) can choose to take a certain percentage of your estate (their “Elective Share”) regardless of what your Will says. If you have no Will, your surviving spouse is automatically entitled to between least one third of your estate. Additionally, Tennessee law provides that your surviving spouse is entitled to: (a) take “exempt property” up to a value of Fifty Thousand Dollars ($50,000), and (b) take a reasonable allowance of money for the purpose of maintaining their life style for a period of one year, and (c) take a homestead exemption of Five Thousand Dollars ($5,000.00). These rights are part of Tennessee’s “government plan”. Other states all have similar “plans”.

Another example: Same facts as above, except that no problems arise between Harry and Sally. Everyone is happy until one day Sally is struck by lightening and dies. Sally has a Will that leaves all her property to her children.

In this scenario, Harry gets the house, Harry gets the bank accounts and Harry gets the retirement account since none of those assets pass through Sally’s Will. Even though Sally’s Will names only her children as beneficiaries, Harry can decide to take his “Elective Share”, which will allow him to take between 10% and 40% of “everything else” that Sally has at the time of her death. If Sally had no Will, Harry would get one-third of “everything else” that his Sally owned at the time of her death, including the family business.

What do Sally’s kids get? If she has no Will, they each get two-ninths (one-third of the remaining two-thirds) of “everything else”. If she does have a Will, it depends on what Harry decides to do. Of course, a lengthy and expensive court battle might help get the children more of their rightful inheritance. Then again, it might just waste the little bit they did receive, leaving them with nothing.

If Sally has a Will it might be better for her kids; but Harry still gets the house, bank accounts and retirement accounts, and would still have the right to take between 10-40% of “everything else” that Sally owned.

Legal consequences of marriage, divorce and death are not the only problem issues that can be addressed by a Premarital Agreement. There are certain psychological and emotional concerns that can be alleviated as well. This is especially true in the case of second marriages. Children of a first marriage often feel threatened that their parent is remarrying. They may worry that their potential inheritance is threatened by their new step-parent. Business partners and other family members may have similar fears. You or your fiancé might have concerns which are easily set aside now, in the blissful period just prior to marriage, but which may arise later to cause problems if not dealt with now. Stress factors such as these increase the likelihood that the marriage will eventually fail. If they are addressed and resolved prior to the marriage ceremony, much heartache (and often much expense) can be avoided.

Certain situations cry out for a Premarital Agreement. Examples include: a) marriages involving people who have children by prior marriages or relationships; (b) people who are involved in a family business or are partners in a closely held business; (c) people who stand to inherit significant assets, and (d) marriages where one party has a great deal more wealth than the other party. Premarital Agreements are often an essential element in estate planning. They can require each spouse to have a Last Will and Testament with terms agreed to by the parties prior to their marriage.

Do YOU Need a Premarital Agreement?

This question can best be answered after you talk with a competent professional such as a family law attorney. Just as you talk with an estate planning attorney when you decide to make your Will, or a real estate agent when you want to buy a home, or a CPA when you have a complicated tax issue; a step as important as marriage should be preceded by discussing the legal ramifications with a lawyer who has your best interests in mind, and who has years of experience representing people just like you.

AN OUNCE OF PREVENTION IS WORTH A POUND OF CURE.